I’ve been working for EMBL, the European Molecular Biology Laboratory, for around nine months now, and only last week did I really start to understand the organisation that I’m part of. Like two-thirds of the Ensembl team, I work at the European Bioinformatics Institute on the Genome Campus near Cambridge, a campus we share with the Wellcome Trust Sanger Institute, which hosts the other third of Ensembl. 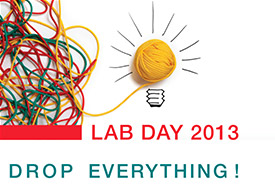 Last Friday I attended EMBL Lab Day, a conference/celebration for scientists working at all of the five EMBL sites around Europe, held in EMBL’s fabulous helix-shaped ATC in Heidelberg. I was looking forward to speaking to the EMBL audience about Ensembl and all the exciting new data and tools we’ve been adding recently (see other entries in this blog to see our recent news). In return, I was excited to find out about all the interesting lab work and data that came out of EMBL, and to get talking to some of my EMBL colleagues.

I was not disappointed. There was such a variety of interesting work being presented in the talks, from new methods of identifying protein structures, to studying the development of haematopoietic cells and the factors affecting cancer recurrence. I was fascinated to learn about new methods to manipulate cell activity using light pulses and how platelets, such small and seemingly simple cells, are able to reorganise their structure on activation using their cytoskeleton. The talks were all short, 12 minutes plus questions, giving enough time to get a taster of the work without getting bogged down with details. Most of the presenters were at a relatively early stage of their research careers, making Lab Day an important opportunity for the speakers to get experience speaking to a receptive and varied audience. 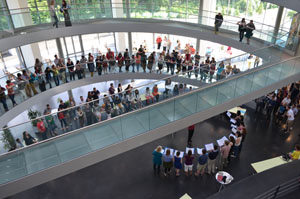 There were long breaks in between the talk sessions, so we had plenty of time to network with other EMBLers and look at the posters, which were displayed all the way up each side of the helix, both serious posters detailing the work of the labs, and fun posters introducing the lab members. Congratulations to Matthias Ziehm from Janet Thornton’s group at the EBI who won a poster prize.

Once the talks were over we celebrated the achievements of young EMBL scientists with a PreDoc (that’s EMBL-speak for PhD student) graduation ceremony, followed by a champagne reception. Afterwards, there were performances by the EMBL choir and drum group, then we had a disco. I made lots of new friends and even got invited to a barbeque on the banks of the Necker in Heidelberg the following evening.

Coming back from Heidelberg, I was struck by two things about EMBL. Firstly, EMBL is a hub of scientific excellence, producing fantastic science and training up young scientists both in and out of the lab to become the scientific leaders of the future. Secondly, it’s just such a nice place to work, promoting scientific and social interaction between its members in so many ways and celebrating the achievements of its members. I’m glad to be part of the EMBL family, and I’m looking forward to Lab Day next year.

If you think you’d like to join EMBL, take a look at the EMBL jobs page to find out more about jobs and fellowships.