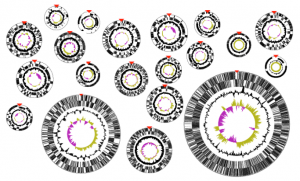 Our latest release brings over 6,000 bacterial genomes into Ensembl for the first time ever!  Users can browse these data interactively on the web with our graphical interface. Programmatic access is available through the Perl and RESTful Ensembl APIs, and through publicly accessible mysql databases. Full data dumps such as DNA sequence and protein sequence in FASTA format, annotations in GTF format, and mysql dump files are also provided on our FTP sites.

Due to this sheer number of new genomes in Ensembl Bacteria in release 17, BioMart access is no longer possible and we are now working on alternative and more powerful data retrieval tools.

An increased number of bacteria (over 120 genomes) has now been used for comparative genomics analyses across a wider range of non-bacterial genomes (from both Ensembl and Ensembl Genomes projects). This is known as Pan-taxonomic Compara and can be visualised in the gene views on the browser or accessed through the Compara database.

In addition to the thousands of new bacterial genomes, we also have six new genomes in Ensembl Fungi and one new genome in Ensembl Protists. We have also improved existing genomes and added new variation, comparative genomics and transcriptomics data for several species.

The significant milestones of this release are:

* Protein families are now classified based on PANTHER and HAMAP matches. Gene trees are provided for several but not for all bacterial genomes

* Mycosphaerella graminicola has been renamed to Zymoseptoria tritici

* Updated cross-references for all 12 drosophilid species

* A missing chromosome in beetle (Tribolium castaneum) was also reinstated, and its gene models updated

* A new genome of a flagellated protozoan parasite, Giardia lamblia, is now available