If you’re really delving into the role of a particular genetic variant, you might want to know about that base position in other species. VEP can get you ancestral alleles in human and conservation scores in many species for a variant position allowing you to assess if a position is evolutionarily important, or if an allele matches our primate ancestors. 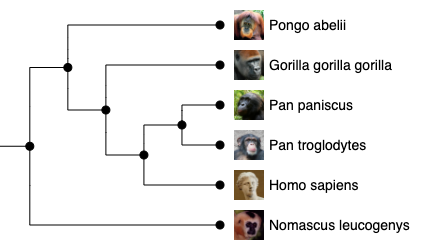 The ancestral allele for each base position is calculated by comparing it to the aligned region in primates. We move up the tree, first checking the position in the most closely related species (chimp and bonobo), if the human reference allele is the same as in chimp/bonobo, we infer that the last common ancestor had that base at that position, and call that the ancestral allele. If human and chimp/bonobo differ, we can’t tell what our last common ancestor had, and which species diverged from that, so we take another step up the tree, comparing to gorilla. We keep stepping up the tree until a match can be found across two branches of the tree. Contrary to common misunderstanding, the ancestral allele is not defined either as the reference allele or the major allele, and indeed can often differ from either/both of them.

The ancestral allele for a variant can be obtained from both the online VEP tool and through a plugin for the offline VEP. These are pre-calculated for human and stored in a file to be looked up by the VEP.

Conservation scores are available for the offline VEP as a plugin. For any species for which a multiple alignment is available, you can see a GERP score for any variant position, indicating how highly conserved a position is within the species set of your choice.