The human gene set now corresponds to GENCODE 22 while the assembly has been updated to include new assembly patches for GRCh38.p2.

In this release we provide comparisons between the imported RefSeq transcripts in human to all overlapping Ensembl models. The comparison is done at the transcript level where all exons are compared in terms of genomic coordinates and the transcript sequences of the two models are also compared. Additionally, we have also compared the genomic sequences of the RefSeq transcripts to the Ensembl models. Both of these data sets are available via our API.

It is now possible to view the Gene gain/loss tree with our new interactive view (which uses the same engine as the species tree view introduced last release). Click on the toolbar to change the layout of the tree or on a node to get its details and expand, collapse, or focus on it. 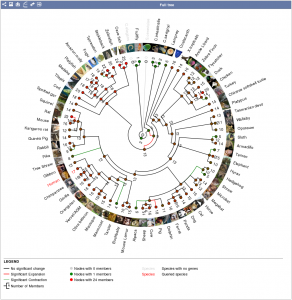 Our REST server now implements the Global Alliance for Genomics and Health (GA4GH) Genomics API. The aim of the GA4GH API is to allow the interoperable exchange of genomic information across multiple organisations and on multiple platforms – see http://ga4gh.org/#/api for further details. Phase 3 genotype data from the 1000 Genomes project is now available from Ensembl via three new GA4GH endpoints.

Genotype data for three sheep species have been imported from the NextGen project. The project aims to preserve the biodiversity of farm animals. The imported populations are Iranian Ovis aries and Ovis orientalis and Moroccan Ovis aries. You can read more about other NextGen data set on the Ensembl projects.