The Amazon molly (Poecilia formosa) is now available on Ensembl Pre! This particular species is especially interesting to scientific research due to its origins, its method of reproduction and the manner in which it interacts with other closely related fish.

The single-sex interspecies school
Considering the name of the species, you would be forgiven for thinking these fish can be found swimming around The Amazon River. The Amazon molly actually resides in the warm waters of North-eastern Mexico and Southern Texas, and derives its name from something far more interesting than its habitat.

One of very few asexual vertebrates, this fish reproduces via a process known as gynogenesis, or sperm-dependent parthenogenesis. Despite being a method of asexual reproduction, gynogenesis does involve the mating of a male with a female. However, the genetic material from the male is not incorporated into the already diploid eggs and the sperm serves only to trigger embryonic development, thereby producing clones of the mother. The entire species is therefore female, and is thus named after the legendary society of female Amazon warriors.

Life finds a way
Due to the absence of male Amazon mollies, the females act as sexual parasites by mating with males from other closely related species. These mates come from species such as P. latipinna, P. mexicana, P. latipunctata and, occasionally, P. sphenops. In fact, it is thought that the Amazon molly originated from a hybridization event between two of these species, the Atlantic molly (P. mexicana) and the Sailfin molly (P. latipinna), approximately 280 KYA. However, all attempts to create P. formosa-like hybrids in the laboratory have, so far, been unsuccessful. 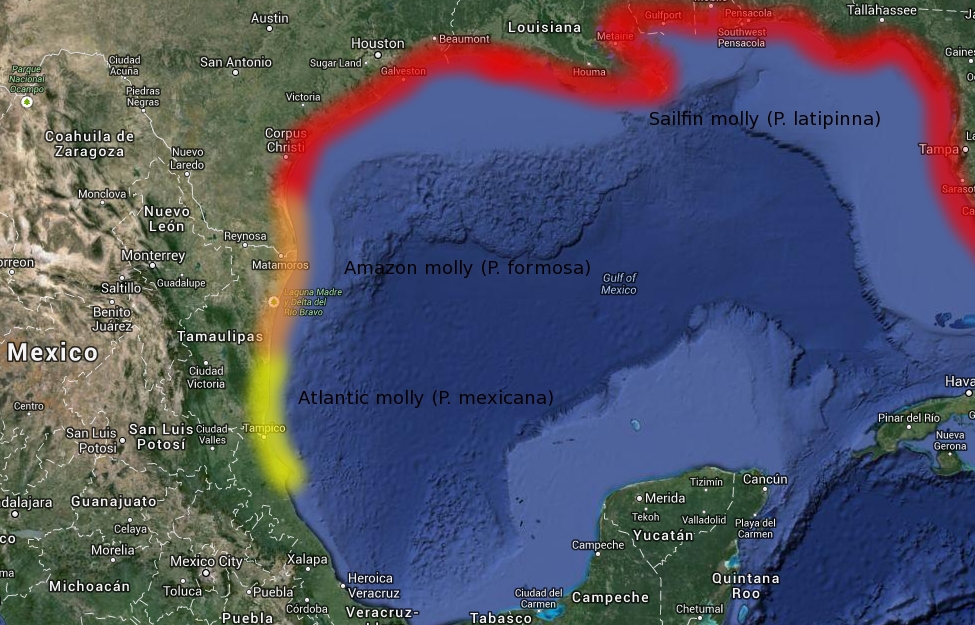 As the male fish do not contribute their genes to the next generation, one would expect that natural selection would act against them being ‘fooled’ into mating with the heterospecific Amazon females. Furthermore, experiments indicate that the males are able to tell the difference between females of their own species and the Amazon species. So why do they mate with these Amazon mollies? Unfortunately, the answer is that we simply don’t know. However, findings have suggested that the male individuals may actually benefit from this behaviour as mating with Amazon mollies seems to make them more attractive to females from their own species. The strange relationship between the Amazon mollies and these male mollies may therefore benefit both parties.

Asexual versus sexual
The main advantage of asexual over sexual reproduction, in any species, is an increase in reproductive output. With asexual females, there is no need to produce males that cannot give birth, resulting in twice the amount of grandchildren than would be produced by sexual reproduction. Asexual reproduction, therefore, should be the preferred method. As Amazon molly offspring are clones of the mother in an environment in which the mother was able to survive, they are also likely to survive and reproduce. This type of reproduction helps colonize new territory very quickly, but a population that reproduces in this manner will likely be unable to adapt to changing environments. Additionally, according to an evolutionary theory known as Muller’s ratchet, deleterious mutations in small asexual populations can accumulate at a fast rate due to a lack of gene recombination, which can eventually result in extinction.

Why study the Amazon molly?
A popular endeavour in modern evolutionary biology is to explain the evolution and persistence of sexual reproduction, given the higher costs of producing male individuals when compared with asexual reproduction. One effective way to research the relative strengths and weaknesses of the two reproductive methods is to study the dynamics of the coexistence of sexual and asexual organisms. The Amazon molly’s unique situation, both with respect to the way in which it reproduces and its interaction with other molly species, makes it an extremely valuable model. It has already been used in studies focused on determining whether or not sexual selection is necessary for high diversity of the MHC. Findings have suggested that the asexual molly has polymorphic MHC loci despite its clonal reproduction, yet these loci are more polymorphic in the sexual species. The Amazon molly is also used as a model for carcinogenicity studies, and is extremely easy to breed and rear in captivity. Furthermore, the clonality of the fish allows researchers to carry out studies on individuals that are genetically identical.

Browsing the genome
The Amazon molly genome assembly was made publicly available in October 2013. We have carried out a preliminary gene annotation, generated by alignments of Ensembl human, stickleback and zebrafish translations from Ensembl release 75. You can find this information on our Pre! site.

Region of the Amazon molly genome as seen in the Ensembl browser. The gene models shown are derived from human and zebrafish proteins.

We’re extremely excited to be carrying out a complete genebuild, incorporating data such as RNASeq, which will be available in a future Ensembl release. Keep an eye on our blog to find out when, and if you have any questions feel free to contact us.