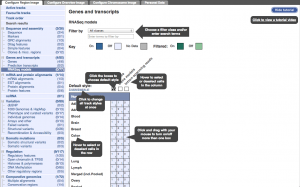 To make management of large number of tracks easier, configuration for RNASeq models for human, sheep and opossum now appears as a matrix. 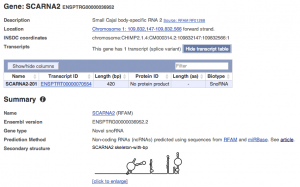 The secondary structure of ncRNAs is now displayed on the Gene Summary page. Clicking on the “enlarge” link below the image will take you to a new page showing more detail of the structure, including base pair mutations and sequence degeneration.

We are happy to announce annotation for three new species in this release.

The sheep (Ovis aries) assembly, Oar_v3.1 (GCF_000298735.1), was produced by the International Sheep Genomics Consortium (ISGC). Sheep is an important livestock animal reared for meat, fleece and milk. We have generated BAM files and RNASeq-based gene models for  91 samples, including a wide range of tissues between a trio (ram, ewe and lamb), 7 tissue types from the reference sheep and different tissue samples from different breeds.

The blind cave fish (Astyanax mexicanus) assembly, AstMex102 (GCA_000372685.1), was produced by the Washington University. This species is used as a model organism in the study of retinal degeneration. We have generated a BAM file and RNASeq-based gene models for cave fish.

The spotted gar (Lepisosteus oculatus) assembly, LepOcu1 (GCA_000242695.1), was produced by the Broad Institute of MIT and Harvard. Spotted gar is biologically similar to other fish, yet its genome is surprisingly similar to human. It is therefore used as a model for understanding human development, and represents a connection to medical models in the teleost clade. We have generated BAM files and RNASeq-based gene models for 10 different tissues.