DNA methylation is an epigenetic mark known to be important in many biological processes, namely in the regulation of gene expression.

In addition to MeDIP-Chip methylation datasets for 17 cell lines and tissues from Rakyan et al (2008), Ensembl now also provides, in the form of DAS tracks, RRBS (Reduced Representation Bisulfite Sequencing) data for 44 cell lines from ENCODE. This data provides genome-scale information at single-nucleotide resolution regarding the methylation state of the genome in each cell line.

To visualize this data, when in the Location View, go to Configure this page in the left panel, and select the appropriate DNA Methylation tracks within the Regulation section of the configuration panel. 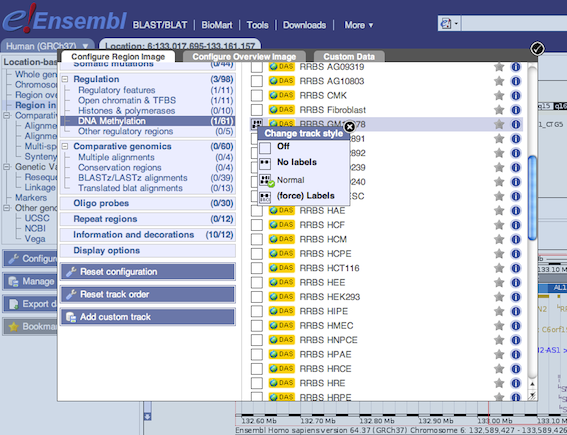 The methylation state is indicated by a color gradient which goes from dark blue, indicating highly methylated areas, through green and then towards yellow which indicates low methylation.

We merged replicates by a weighted average of the percentage of methylation of the replicates, but only taking positions with at least 20 reads in the combined set.