If you’ve been at VizBi 2019, you’ll have seen Andy Yates previewing our new website design. If not, here’s your chance to take a look.

Back in October, we introduced you to our new joint initiative with the NCBI — the Matched Annotation from the NCBI and EMBL-EBI (MANE) transcript set. We are now pleased to update you on our progress so far.

The goal of this project is to share annotation and converge on a high-confidence, genome-wide transcript set, with a matched transcript in both RefSeq and Ensembl/GENCODE. We are doing this in two phases. During phase 1, we will release the “MANE Select” transcript set to include one well-supported transcript for every protein-coding locus. We envision the adoption of the MANE Select set as a default set across genomics resources. In phase 2, we intend to release an expanded set (“MANE Plus”) to include additional transcripts per locus that are well-supported or of particular user interest.

You may have heard us squeaking about our new mouse regulatory build in our Ensembl 93 release blog. If you’re interested in finding out what exactly a ‘regulatory build’ is, and how to view and download this data in Ensembl, then this is the blog for you! 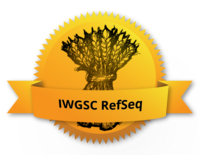 As of Ensembl release 93, which is due at the end of the month, the Gene Variant Image view will be retired for human. We have elected to retire this page because we feel that the density of known genetic variation is too great for this view to be informative in its current form.

In the latest Ensembl release (Ensembl 90, August 2017), we have added the option for you to adjust the y-axis of your custom “wiggle” tracks, such as BigWig and bedGraph files.
Continue reading

Since release 81, Ensembl has provided the gene annotations in GFF3 files alongside the already existing GTF ones. While GTF uses its own controlled vocabulary to classify features, GFF3 takes advantage of sequence ontology. In the initial release, we attempted to map all existing Ensembl biotypes to equivalent SO terms.

This has proven unsatisfactory for several reasons:

For all these reasons, our SO term mapping has undergone a major overhaul to take advantage of the functionality sequence ontologies offer. This new mapping, which will be used from release 90 onwards, attempts to provide general biotype groupings that match the ones used on the website. As a result, all gene biotypes are mapped to one of these three groups, coding, non-coding or pseudogene. Meanwhile, transcript biotypes are mapped to one of five main groups: mRNA, pseudogenic_transcript, long non coding RNAs, short non coding RNAs and IG biotypes.

Additionally, the groupings remove some of the previous granularity that can still be explored via the biotype and the assigned terms respect the gene-transcript relationship where possible.

To see the full extent of those changes, as they will be reflected in the GFF3 files provided from release 90 onwards, please check these files on the FTP.
We hope this improvement will help our users take better advantage of the GFF3 format.

Ensembl transcripts have two identifiers, the versioned ENST, which is stable through time and can be tracked from release to release, and a separate identifier that incorporates a gene symbol. The latter have changed in e!89; read on for more details.Continue reading 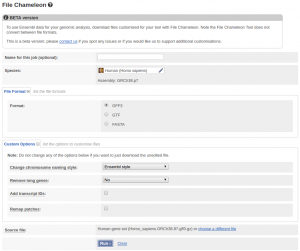 Transforming file formats has always been a troublesome issue in bioinformatics because of the numerous standards and slight eccentricities in formatting required by some software packages. How many times have you needed to transform chromosome names between 1,2,3 and chr1, chr2, chr3 or vice versa? With the introduction of File Chameleon we hope to somewhat smooth this process for data consumers.

File Chameleon is a web service introduced by Ensembl to transform Ensembl FTP files for easier use across the spectrum of bioinformatics tools. Need UCSC style chromosome names? Need genes longer than 4Mbp removed? File Chameleon can do that. From the File Chameleon web interface simply select the species and which flat file you want to download (individual chromosome gtf, full assembly fasta, etc), then select which filters you want to apply. The file will be transcribed and ready to download within a few minutes.

Currently File Chameleon only operates on GTF, GFF3, and FASTA formats and has a very limited set of filters for each format, however we’re committed to expanding the tool over future releases. Please take a look and give us feedback, which of the Ensembl formats would be useful to add, and more importantly what transformations and filters on the data would make it more useful for you? What is the awk or sed script you run on the files you download that we can do for you, or others might find helpful?

File Chameleon is also available as a standalone tool and is designed to have easily pluggable filters. If you find the tool useful, you can run it locally and expand it writing your own plugins to further process files. The package can be downloaded via GitHub along with extensive documentation and examples.