NCBI have recently released plans to immediately retire their HapMap interface, however, data from the HapMap Project will continue to be freely accessible through Ensembl. There is lots of help and documentation as well as video tutorials to help you learn how to access variant data in Ensembl. This post aims to complement those materials to highlight the methods for accessing the HapMap Project variant data specifically.

You can find data from the HapMap project relating to specific variants by searching for the variant rsID itself. In Ensembl, you can find information related to variants identified in the HapMap Project, which includes population genetics statistics: 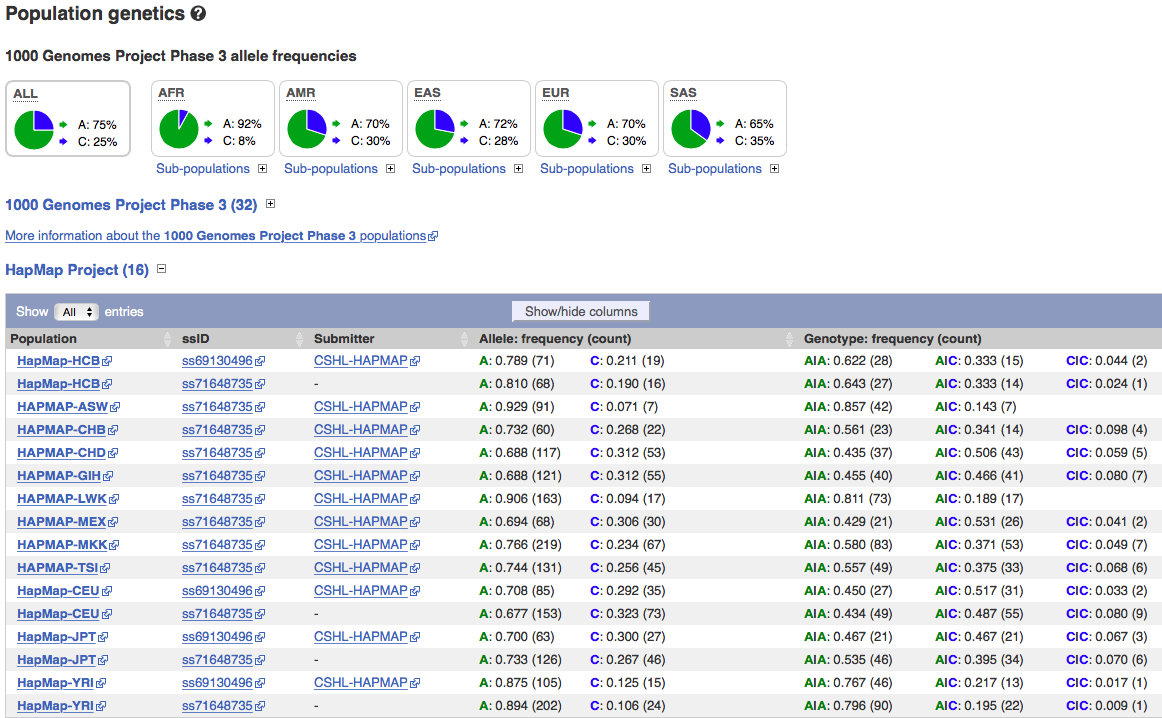 However, as you can see from the example above, some of the populations represented in the HapMap Project have two separate entries in the Population Genetics table. This is because the HapMap Project was completed in a number of phases. In the first phase, a number of different groups used different genotyping platforms to type variants from a number of population panels (CEU, YRI, HCB, JPT). In a later phase, a larger set of samples were added to the samples from the initial phase and submitted as HapMap3. The two entries refer to the two submitted phases of the HapMap Project, where the number in brackets next to the allele frequency indicates the number of samples in that population.

Filtering the Variant Table by ‘Evidence type = HapMap’ will filter the displayed variants to those identified in the HapMap project. This will be denoted by the

in the Evidence column.

HapMap SNP data can also be retrieved using BioMart. There is help and documentation and a video tutorial to help you while using BioMart.

When querying the Homo sapiens short variants dataset in BioMart, you can access HapMap variant data specifically by using the ‘Variant Set Name’ filter and selecting the HapMap populations that are relevant for your research. 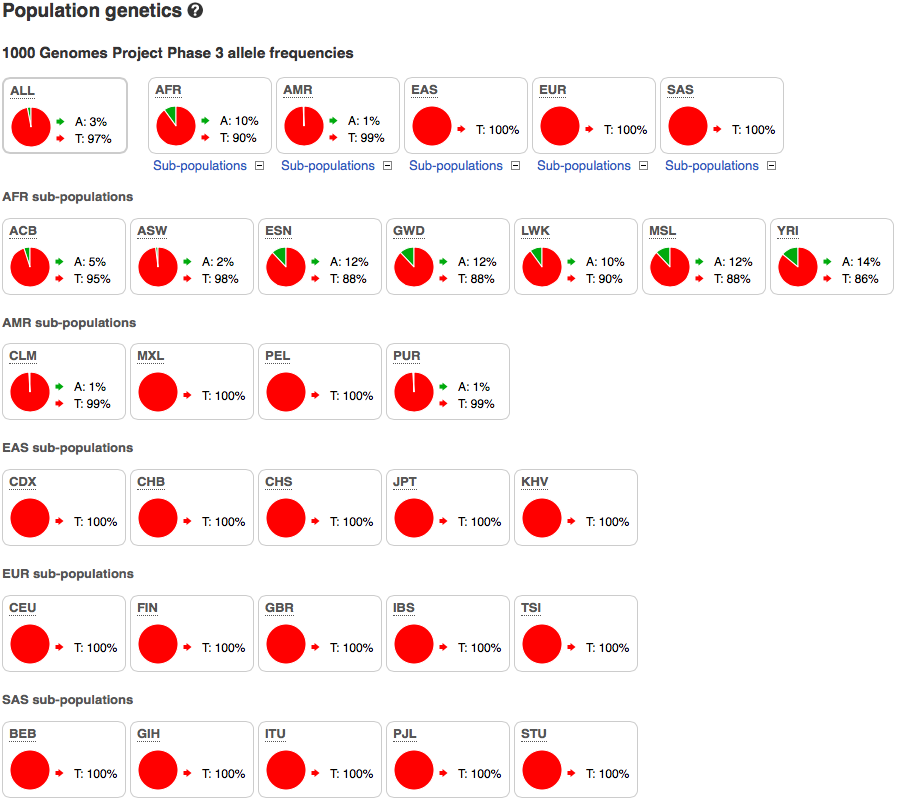 There are legs and tentacles everywhere in this release of Ensembl Metazoa, as ten new species scuttle, swim and slither into our databases. From the Antarctic midge to the California two-spot octopus, the new species illustrate the diversity of metazoa. Our new Metazoan species also include dog and rat parasites (the itch mite and a nematode), as well as species that pose significant problems for agriculture (Australian sheep blowfly) and aquaculture (the salmon louse and a myxosporean). The common bumblebee is an important pollinator, a brachiopod represents a new phylum in Ensembl Metazoa, while the African social velvet spider is a fascinating model of sociality and is the first spider in Ensembl Genomes.

Not to be outdone, Ensembl Protists is now updated to 158 genomes from 104 species and Ensembl Bacteria has been updated to include the latest versions of 39,584 genomes (39,183 bacteria and 401 archaea) from the INSDC archives.

Fungi: Updated annotations based on PHI-base 4.0 have been included. New variation data for Schizosaccharomyces pombe.

Plants: There are now 350,000 new rice variations across 3,000 rice accessions from 89 different countries as well as track hubs for more than 900 public RNA-Seq studies, totalling more than 16,000 tracks across 35 different plant species.

Check out all the changes on our Ensembl Genomes website.

Any questions or comments? Email us.

BLUEPRINT is a large scale research project aimed at deciphering the epigenome of blood cells. ChIP-seq and DNase hypersensitivity data from the BLUEPRINT project has now been incorporated into Ensembl. All of the cell types analysed in the BLUEPRINT project are listed here. In Ensembl 84, we are including BLUEPRINT data for the following 20 independent cell types, divided based on cell lineage and tissue source:

This data can be viewed alongside other tracks in Ensembl by using the ‘Configure this Page’ option and selecting your cells of interest.

You are now able to calculate linkage disequilibrium (LD) between any two variants in Ensembl. To calculate the r2 and D’ values for LD between two specific variants, enter the ID of any variant into the LD calculation text box on the specific page of the reference variant. This feature can be found by clicking on ‘Linkage Disequilibrium’ from the menu on any variant page.

With the arrival of the new Track Hub Registry, we have added a feature that allows you to search for track hubs of interest and attach them directly to Ensembl. Just click on the ‘Add your data/Manage your data’ button on any Ensembl page, and select ‘Track Hub Registry Search’ from the lefthand menu.

The interface will only search for hubs that have assemblies available for the site you are on; to see the full range of species and assemblies, visit the Track Hub Registry site directly.

The transcript haplotype view is a new data view we have implemented that allows you to explore observed transcript sequences that results from variants identified from resequencing data from the 1000 Genomes Project. By clicking on the ‘Haplotypes’ link on any transcript page, you are able to view protein consequences, population frequencies and protein alignments of all the haplotypes for that particular transcript. 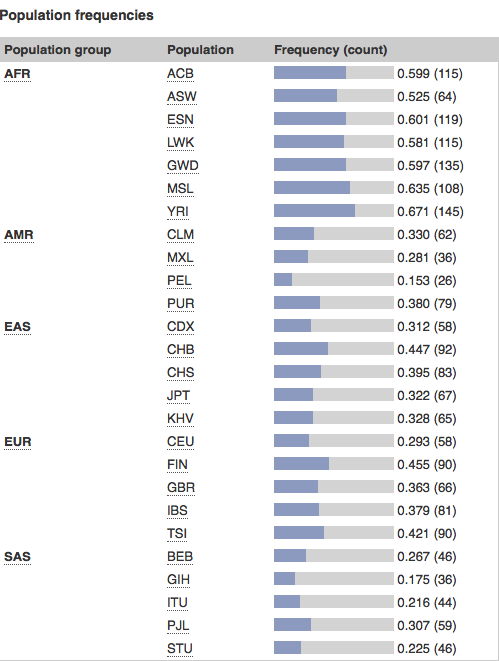 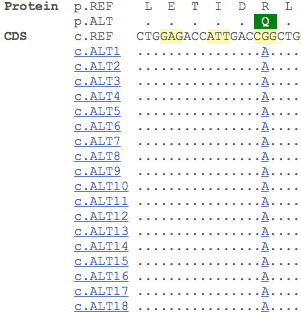 Find out more about the new release, and ask the team questions, in our free webinar. Wednesday 16th March, 4pm GMT. Register here.

Ensembl 84 is scheduled for March 2016 and includes:

Other highlights and data sets

Would you like to include images from Ensembl during a presentation or in your paper or poster?

We are happy to announce that a new image export option is available in Ensembl 83, which optimises colour and contrast settings for presentation on a projector or in print. You can download images from Ensembl using the ‘Export this Image’ icon, at the top-left of every image. Below is the image download form, showing the new export options. 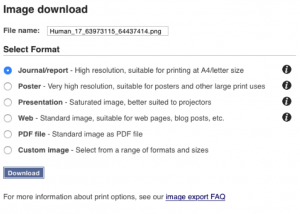 Presentation options
Our new export feature for presentations alters the image to be clearly visible on projectors by:

You can see the difference below. On the left is a ‘Standard Web’ exported image. On the right is the same exported image with the ‘Presentation’ feature. 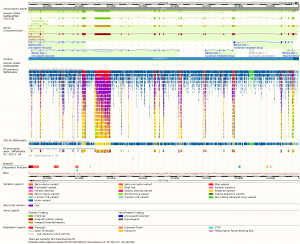 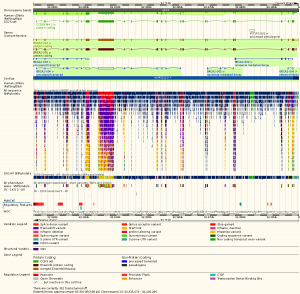 Print options
If you’re looking for an image for your paper or poster, try our new print options, labelled ‘Journal/report’ and ‘Poster’. Images exported for print have a high resolution, which produce x2 and x5 enlargements respectively.

Other export options
You can also export the standard web image in PNG or PDF format for use on the web, or SVG format by clicking on the ‘Custom image’ export option.

You can find more information about exporting images by clicking on the information icons in the export menu.

We would love to hear from you if you have used the new image export options for your own work. Image parameters can be tweaked, so we welcome feedback on whether these features suit your needs. Leave your comments below or contact the Ensembl helpdesk.