We have been busy over Easter and Ensembl 92 is now live!

Read on to check out the highlights of this release and join us for our release webinar on Monday 9th April 2018 at 16:00 GMT to learn more about the new data and features. 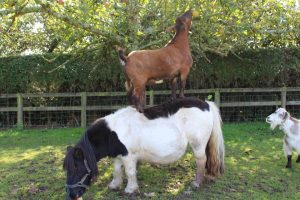 The eagerly-awaited highlight of Ensembl 92 is the first annotation of the goat genome based on the ARS1 assembly! We used RNA-seq data and homology based models to generate a complete gene set. Included in this release are a new RNA-seq database and the imported RefSeq gene set. We also have variation data from dbSNP build 143 and genotype data from the NextGen project.

We have got new zebrafish (GRCz11) and marmoset (ASM275486v1) assemblies in this release and generated new gene sets. We have made new RNA-seq databases for both species available and have imported the RefSeq gene set for Zebrafish.

Do you want to find out what biological pathways your gene is involved in? Have a look at our new ‘Pathway’ display on the Gene tab! Both the data and the interface come directly from Reactome, a well-established manually curated and peer-reviewed pathway database.

The display has a list of pathway identifiers and associated diagrams in which your gene is highlighted. You can navigate the diagrams by zooming in or out, moving in all directions or searching for a term. You can also export a diagram as an image in PNG format or as a Powerpoint slide which you can edit for your next presentation!

We have updated our human and mouse gene sets. This brings us to human GENCODE 28 and mouse GENCODE M17 with the CCDS and latest Ensembl-Havana genes for both species. It also includes the human genome GRCh38.p12 patches.

We map probe sets from a number of commercially available microarrays to genes and transcripts in Ensembl. Microarray probe mappings have been added for Goat, Marmoset as well as Cinnamon the Cat. They have been updated for Human, Zebrafish and several other species as well as mouse strains.

We have updated our human variation databases with:

In addition to the new goat variation and genotype data, we provide updates to further animal variation databases:

Ensembl 91 brought you the Linkage Disequilibrium Calculator web tool. In Ensembl 92 we include the command line version of this tool. It will help you to speed up your analysis!

If you would like to learn more about Ensembl 92, watch a guided tour of its features or ask questions to our team, please register for the release webinar on Monday 9th April 2018 at 16:00 GMT.