I’d like to introduce you an exciting new data set that we’ve introduced in Ensembl release 62: RNASeq data from Illumina’s Human BodyMap 2.0 project. The data, generated on HiSeq 2000 instruments in 2010, consist of 16 human tissue types, including adrenal, adipose, brain, breast, colon, heart, kidney, liver, lung, lymph, ovary, prostate, skeletal muscle, testes, thyroid, and white blood cells. Raw reads are available for download here. For each tissue, we have aligned the raw reads to the genome and then linked exons into tissue-specific transcript models using the reads that span an exon-exon boundary.

You can view these data in the Region in Detail view. Click on ‘Configure this page’ and choose ‘RNA-Seq’ at the left of the main panel. Enable any or all of the 32 tracks and then close the configuration panel. Out of 32 possible tracks you can draw, 16 are tissue ‘gene model’ tracks, and 16 are ‘intron’ tracks.

In this example, the kidney gene model track shows a transcript (dark blue) with an exon structure that matches the gold-coloured Ensembl transcript AQP6-001. The kidney transcript model includes coding and noncoding exons (in the example above, the empty box is UTR, and the filled boxes are exons).
Click on the kidney intron track to see that 192 raw reads were split between the first and second exons.

This example is interesting because it shows a gene with high expression in kidney tissue, and almost no expression in any other tissue.

The high read coverage for kidney means that the transcript’s exon-intron structure produced for the gene track has a good chance of being correct. When read coverage is very low, it is not always possible to build a full-length transcript model: Look at the colon and brain intron tracks to see that two colon reads and three brain reads have aligned across the transcript’s middle exon-exon junction. Although this read coverage is low, our pipeline has generated a transcript model for brain tissue. The pipeline however was not able to predict the two splice on either side because there were no raw reads from brain aligning over the splice junctions.

Below is a nice example of a gene that seems to be expressed in all 16 tissues, spermidine synthase (SRM). 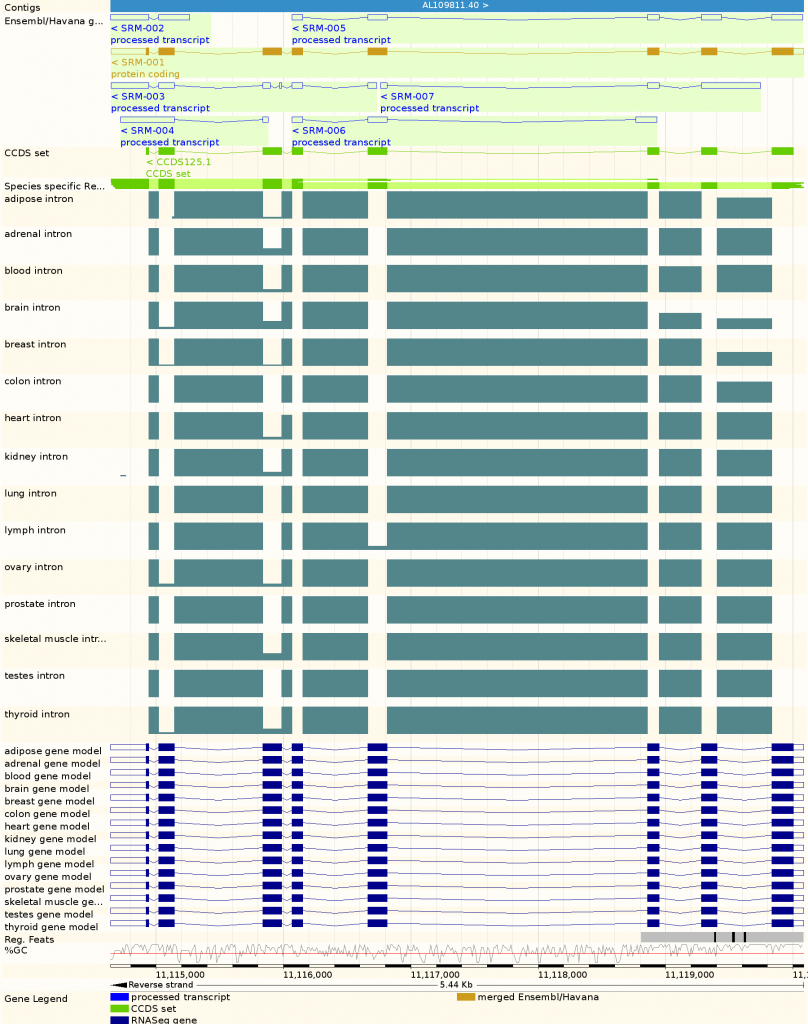 Try dump_transcripts.pl as an example script to access the RNAseq-based transcript models. Have fun with these new data!